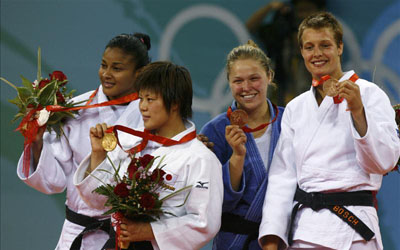 UFC, the world’s largest mixed martial arts organisation, will be supporting the championships which will take place on 12th July at Wembley Arena.

The sponsorship deal will also see UFC take advertising on the British Judo website and social media as well as other advertising opportunities as they look to support and promote sport and the national governing body.

The partnership will support the promotion of combat sports and is expected to have a positive impact on grass roots participation in judo.

Speaking on the sponsorship deal, British Judo Chief Executive, Andrew Scoular said: “We are absolutely thrilled at our new partnership with UFC, which will bring about many mutual benefits for both the organisations and the sports of MMA and Judo in the UK.

“We look forward to developing other sponsorship and advertising opportunities with UFC in the future.

“By partnering with such a leading martial arts brand as UFC, we will receive significant added exposure for British Judo as a core martial art and the partnership will be instrumental in raising the profile of the sport of judo, ultimately leading to increased participation for young people.

“British Judo’s values include discipline and responsibility. These along with respect and ethics are shared by UFC.”

Garry Cook, UFC Chief Global Brand Officer said: “The 2015 British Open Judo Championships will be a fantastic event and an important stage on which athletes can perform and promote their sport.

“Judo is a key component of mixed martial arts, and we are excited at the prospect of bringing together UFC fans, Judo supporters and practitioners of both sports.”

Judo is one of the combat sport disciplines widely used by MMA fighters within The UFC, a link which is demonstrated particularly well by UFC Bantamweight Champion Ronda Rousey (USA) who won Judo Bronze medal at the Beijing games in 2008 and made her MMA debut in 2010, before becoming the first female fighter to sign a lucrative contract with the UFC in 2012.