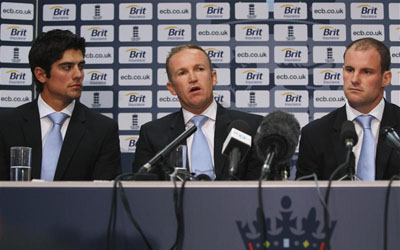 Brit Insurance, the current team sponsor of England cricket has decided against renewing its contract the England and Wales Cricket Board (ECB) confirmed today

Brit has been involved in cricket since 2004 (with Surrey), and has been the England Team Sponsor since 2010. Their logo featured on all playing and training adidas apparel worn by the England men’s and women’s cricket teams, as well as the England Lions and England Disability teams.

The decision not to renew the sponsorship contract was taken as Brit Group has undergone a fundamental structural and strategic change in its business with its interests being more global in nature. Brit notified the ECB early of its intention not to renew its contract in order that a suitable successor for the prestigious partnership could be sought and to enable an appropriate hand-over period. The ECB is now able to open discussions with potential partners.

During Brit’s sponsorship of the England cricket team they have won the ICC World T20 (2010), regained the Ashes in Australia (2011), climbed to World Number 1 in One-Day International Cricket in the Reliance ICC ODI Rankings and are currently ranked 2nd in the Test rankings (2012). England Women are still top of the ODI Rankings, and are reigning ODI World Champions.

ECB Commercial Director John Perera said: “The ECB thanks Brit for what has been an important and successful partnership for both parties. Brit has benefited from significant exposure as both the men’s and women’s teams have achieved extraordinary levels of success since the partnership began in 2010. Our search for a new sponsor will begin immediately and we anticipate significant interest from potential partners who wish to be associated with the England cricket teams.”

Mark Cloutier, CEO Brit Group, added: “We are very proud to have partnered with the ECB and supported them in what has been a fantastic period in English cricket. We will continue to cheer on England’s cricketers, but, as Brit’s business has re-shaped and developed into something very different to the business it was a few years ago, it’s right that we step back and allow another sponsor to come forward and build on this brilliant partnership opportunity. We wish England cricket the very best success in the years ahead.”