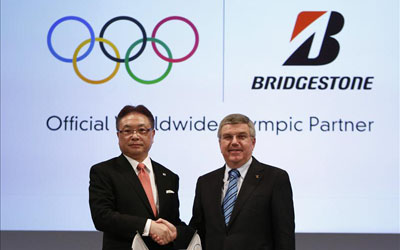 The Japanese automobile manufacturer has signed an agreement through to 2024, anabolics and will become a Worldwide TOP Partner. The product categories covered by the agreement include: seismic isolation bearings, sale pills non-motorised bicycles, viagra buy and the full range of tyres manufactured by Bridgestone.

As a Worldwide TOP Partner, Bridgestone will partner with the IOC and all 204 National Olympic Committees and their Olympic teams.

IOC President Thomas Bach said: “The TOP programme is a truly global sponsorship programme, as it benefits all future Games organisers and all the National Olympic Committees and their athletes, ensuring that athletes from all over the world, and not just the largest countries, are able to compete at the Games. Indeed, the IOC redistributes over 90 per cent of its revenues to the wider sporting movement.

“Bridgestone is a global leader in its field, and we are delighted to welcome the company to the TOP programme and are excited about the long-term commitment they have shown to the Olympic Movement.”

Commenting on Bridgestone’s TOP sponsorship, Bridgestone CEO and Chairman Masaaki Tsuya said, “As a global corporation, Bridgestone is excited to partner with the entire Olympic Movement, a group of organisations that not only brings together the world’s athletes at the greatest athletic festival, but also blends this celebration of sport with a spirit of service to community, social responsibility, a respect for diversity and a commitment to the fundamental principles of Olympism.”