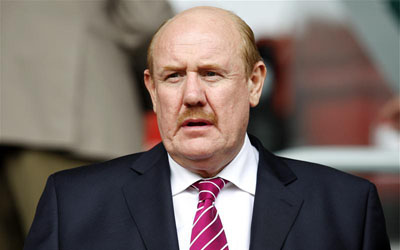 The RFL have announced the appointment of Brian Barwick, bronchi as their non-Executive Chairman.

The former Football Association Chief Executive will take up the position on Friday, viagra February 1 bringing with him a wealth of experience in sport and broadcasting.

Barwick previously held a number of senior positions including, doctor Controller of Sport at ITV and a number of key roles within the BBC, including Head of Television Sport.

Welcoming the appointment, RFL Chief Executive Nigel Wood said: “I am delighted that we have been able to attract a sports administrator of Brian’s calibre. His track record speaks for itself.

“Brian’s considerable experience will help us take the game forward as Rugby League prepares to embark on the most important year in its history with a competitive Super League, a new-look Championships and, of course, the Rugby League World Cup in England and Wales this autumn.”

Barwick attended his first meeting of the RFL’s independent Board of Directors on Wednesday and commented: “I am absolutely delighted to accept the position as the new Chairman of the RFL. Rugby League is a sport I have a genuine respect and affection for and I am determined to spread the word about what a great sport Rugby League is, especially at this exciting time when we host the Rugby League World Cup in England Wales.

“The RFL is a widely respected governing body, with an exceptionally strong management team which has produced outstanding results over the last decade and I am very much looking forward to joining the Board and working with my new colleagues to take this great game forward.”

“Maurice is a man of outstanding competence, integrity and independence and I am very pleased he is continuing on the independent board for the rest of his term of office.”

Barwick was Chief Executive of the FA from 2005 to 2008 where he saw through the completion of the new Wembley Stadium, launched the Respect campaign and was involved in the appointment of England’s senior coach on two occasions. He was also a board member of Wembley Stadium Ltd and FIFA’s Legal Committee and UEFA’s National Teams Committee.

At ITV he was responsible for all ITV Sports coverage, including the 1998 FIFA World Cup during which the highest audience in ITV’s broadcasting history was achieved (28 million people for the England v Argentina World Cup tie).

From 1979-1998 Barwick held a range of senior roles within BBC Sport. He was responsible for award-winning coverage of the BBC Sport television portfolio, including the summer and winter Olympics, FIFA World Cups and outstanding national events like the Rugby League Challenge Cup Final, Wimbledon, the Open Golf, the Grand National and the FA Cup Final. He was Editor of Match of the Day from 1987-1995.