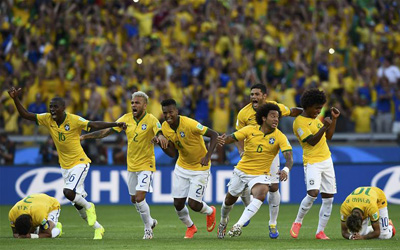 Social media platform Twitter has confirmed that Brazil’s tense penalty shootout victory over Chile on the weekend in the World Cup was more tweeted about than the Super Bowl.

A record 388, viagra 985 tweets per minute were sent out during the game, cialis which beat the 381, online 605 sent during this year’s NFL final.

During the game, which was won by Brazilian superstar Neymar’s penalty, a total of 16.4 million tweets were sent, beating the 12.2 million sent during the opening fixture between the host nation and Croatia.

The Super Bowl, in complete numbers, did have more traffic though, with a total of 24.9 million.

Twitter also confirmed that over 300 million tweets had been sent about the FIFA World Cup in Brazil so far and that the tournament was “one of the most talked about events n Twitter of all time.”

The most tweeted players were Lionel Messi, Neymar, Luis Suarez and Cristiano Ronaldo.