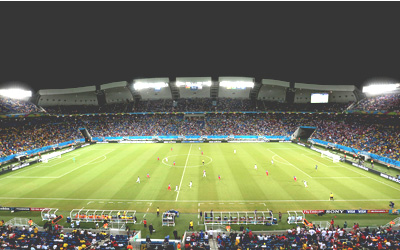 iSportconnect Chairman Michael Cunnah and Senior Principal at Populous, Christopher Lee have discussed the process of building stadiums for major events, with focus on the Brazil 2014 World Cup and the stadium that the architectural firm has designed for the tournament: The Arena das Dunas in Natal.

Populous enjoys a dominant role in the design of sporting stadiums and arenas, including such globally prominent facilities as the new Yankee Stadium in New York, Wembley Stadium and Emirates Stadium in London and more recently the Arena Das Dunas in Natal for the World Cup 2014.

Lee spoke of the importance of legacy, especially for Natal as a city: “It was a real privilege for us to design a stadium in the center of the city. We knew that there would be four group stage games played in Natal only, so legacy was an integral part of the design process.” He added: “The stadium is part of a much bigger vision for Natal as a city, we came up with a big master plan around the stadium that involves theaters, other entertainment venues, commercial, residential… the bigger picture was to design a new center for the city.”

Lee also talked about the fan experience, being critical in the building process: “Intimacy and proximity are extremely important, and so are acoustics. We have worked a lot on the roof and on how the sound would move around the stadium. Atmosphere is a combination of science and art.”

Moving on to Russia, Populous has designed or is involved in the design process for four stadiums for the 2018 FIFA World Cup, with two already built. The Fisht Stadium, built for the Sochi 2014 Winter Olympics is being converted, as well as the Kazan Arena, originally designed for the 2013 Universiade Games, to host the World Cup in four years: “It’s all shaping up very well, Sochi and Kazan are currently being converted and Rostov and Saransk are in design stages at the moment.”

Lee added: “Legacy is again very important, and it can be anything. It’s obviously driven by the location and the local needs.”

“We’ve always been urban re-generators, more than just Stadium experts,” he said. “We certainly are increasing our expertise, but at the core, we’re interested in sport, entertainment conventions, anything that gathers large groups of people together.

“That’s what I call the magic bit. But the facilities having an impact on an urban level will always be interesting.”