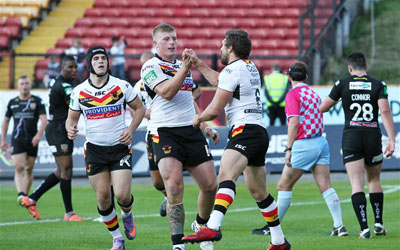 Bradford Bulls have revealed an offer has been accepted to take permanent control of the Super League club.

Since early last month, the Bulls have been under the temporary ownership of Bradford Bulls 2014 Ltd, who took control after its former holding company, owned by Omar Khan, entered into administration.

However, administrator David Wilson has now agreed a deal with the interim owners, who will now seek approval from the Rugby Football league to allow the club to continue competing in Super League.

In a statement, Bradford Bulls 2014 Ltd chief executive Robbie Hunter-Paul, said: “We are delighted that our offer has been accepted by David Wilson and are now approaching the final stages in the change of ownership of Bradford Bulls.

“The position of the board of directors of Bradford Bulls 2014 Ltd has always been to be open with supporters and stakeholders and that is why we are making an effort to update everyone concerned with precise and accurate information.

“The RFL’s board of directors must now take a view on our offer, our plans for the future and the way in which we intend to work with creditors going forward.

“Despite recent reports, the ownership of the club now has to be approved by the governing body.

“There are right and proper protocols to follow and a due process which is still to take place. But we are extremely confident that we will receive ratification in the near future, handing us the right to operate in the sport’s top flight.

“The first step was to offer the best deal for the club – and we have done that. The next is to get the nod from the RFL.

“We hope our supporters can appreciate the hard work that is going on here at The Provident Stadium, across all departments, to ensure a successful future for the Bulls.

“We believe we are close to a conclusion on the matter of ownership. That in itself is hugely pleasing.

“My message, to the fans, is to continue their fantastic support. We will take this club back to where it belongs.”

The club could still face a points deduction for having entered into administration, and are expected to find out their punishment early next week.