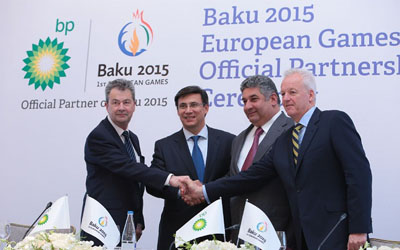 BP, therapy formerly known as British Petroleum, has agreed to be an official partner of the Baku 2015 European Games it was announced today.

BP will become Oil and Gas Partner for the first ever European Games, in an agreement which will also see the company assist elite athlete development in Azerbaijan.

As well as promoting Baku 2015 across Azerbaijan, BP will help fund the development of aspiring medal hopes for the host nation ahead of the European Games.

Mr Azad Rahimov, Azerbaijan’s Minister of Youth and Sports and Chief Executive of Baku European Games Operation Committee (BEGOC), said: “BP is a company that has a long-standing presence in Azerbaijan and a deep understanding of the country.

“It has a history of supporting major international sports events around the world and we are delighted to be welcoming it as an Official Partner of the European Games.

“I am sure its support will help support the Games across Azerbaijan and Europe, and also help develop our athletes further in their pursuit of excellence.”

Ian Sutherland, BP’s Regional Vice President for Azerbaijan, Georgia and Turkey, said: “We are delighted to be able to support Azerbaijan as it starts to prepare for such a grand sporting event. We believe this presents a unique opportunity for the country as it makes efforts to become a greater centre for sporting excellence.

“This is also a unique opportunity for hundreds of enthusiastic young Azerbaijani nationals to develop new skills and knowledge adding to the country’s international events delivery capability. BP is pleased to be supporting the Games Academy initiative which we believe will enhance Azerbaijan’s overall capability-building efforts and will leave a strong legacy of project delivery.”

The deal follows Baku announcing Tissot as their official timekeeper and the city marking the one year to go milestone with a fireworks display.