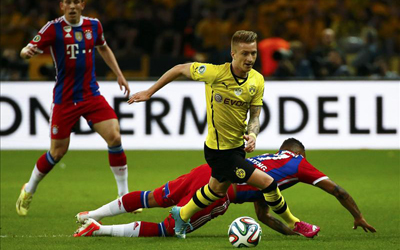 Eurowings will be the new “Champion Partner” of Borussia Dortmund from 1 July 2016 onwards.

The airline, which forms part of the Lufthansa Group, will closely accompany the BVB squad from next season and will serve as the club’s official airline for away matches.

The cooperation includes the presence of advertisements in the stadium (e.g. hoardings, giant video screens, coaches’ benches) and, on top of that, an extensive digital cooperation, including social media. On Facebook alone, Borussia Dortmund currently has more than 14.2 million fans.

“This partnership brings together two dynamic, ambitious companies which both have an enormous binding power and want to play a significant role in their respective core businesses on a national and international level,” said Borussia Dortmund Chief Executive Officer Hans-Joachim Watzke.

Carsten Cramer, the club’s Director of Marketing & Sales, added: “Eurowings is a new brand that originates in Dortmund. Similarly to Borussia Dortmund, Eurowings sees itself as a challenger and is therefore a very good fit for us.

“We are excited to see the link-up play between high-speed football and high-speed travel.”