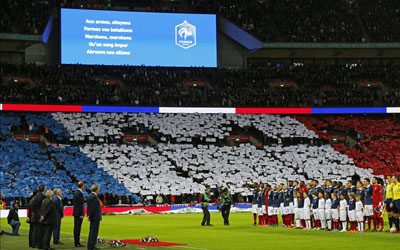 Just days after terrorist attacks in Paris including some near the Stade de France, a similar situation was thwarted on Tuesday evening as a friendly between Germany Netherlands was cancelled due to a suspicious package being found.

Around 90 minutes before kick-off, the Hannover Stadium was evacuated and local reports suggested a device had been found near an ambulance.

Later, Hannover police chief Volker Kluwe warned of a “concrete danger situation throughout Hannover”. He added: “We have had concrete evidence that someone wanted to detonate an explosive device at the stadium.”

Germany Chancellor Angela Merkel had been scheduled to attend the game which had been cleared only after lengthy discussions between the Interior Ministry and security directors in light of events in Paris.

Merkel had arrived in the city but had not set out for the stadium.

Hannover Mayor Stefan Schostok said: “Safety is paramount. This is a fear that you will always have. I trust the police that they have made the right decision. If a threat situation exists then these are the steps which must be taken.”

Meanwhile, 71,223 turned out at Wembley to see England take on France in a significant match that saw the home crowd proudly present the Tricolore and join in singing La Marseillaise before kick-off.

Floral tributes were brought to the field by England manager Roy Hodgson, France manager Didier Deschamps and Prince William in honour of the 129 victims of the attacks in the French capital. UK Prime Minister David Cameron was also in attendance.

On Monday, the Belgium FA confirmed that their proposed friendly with Spain on Tuesday had been cancelled due to a perceived security threat.