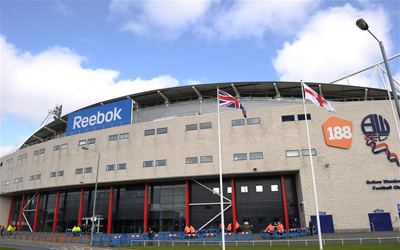 Bolton Wanderers will not be entering into a sponsorship agreement with payday loan company QuickQuid after a backlash from the local community.

After discussions with fans and local politicians, Wanderers have decided to pull the deal and will instead be backed by FibrLec, a local sustainable energy company.

A statement on the club’s website read: “The club is proud of its place in the local community and has worked tirelessly for a considerable time to build relationships across a wide spectrum of community projects.

“In particular the successful education programmes, which have seen over 350 students pass through the club in the last two years, and the continued exceptional work of the club’s Community Trust.”

The statement went on to add that whilst the board ‘anticipated some negative responses,’ they had ‘underestimated’ the level of reaction from the local community.

Bolton chairman Phil Gartside added: “We don’t want our commercial relationships to come between us and our community, and neither does QuickQuid.”

Nigel Currie, a sport sponsorship expert and director at brandRapport told iSportconnect that he did not expect this to open the way for other clubs to pull sponsorship deals based on fan reaction.

“Outside reaction does still carry some clout but if the deal is big enough don’t expect too many clubs to listen to the fans,” said Currie.

“At the end of the day money talks, and the fans now realise that in order for their team to compete at the top levels they have to secure as much funding as possible from whatever sources they can.

“Bolton should have been aware that a backlash would come from various quarters but it probably needed wider discussion within the club before they made any announcements.”

The news comes a day after the club revealed their new crest.

To let your feelings on the Bolton and QuickQuid deal be heard, click here to join the latest iSportconnect discussion.