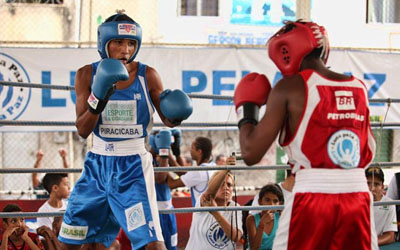 BOA Confirm Fight For Peace as Charity Partner for Rio 2016

The British Olympic Association (BOA) has announced Fight for Peace as one of its charity partners for the Rio 2016 Olympic Games.

Fight for Peace is a Non-governmental Organisation which combines boxing & martial arts with education and personal development in communities affected by crime and violence and have academies in both London and Rio de Janeiro.

As part of the agreement the BOA will provide expertise and counsel for Fight for Peace staff in the development of a sport performance programme with support of Team GB and its sporting partners.

The partnership has also been created with the purpose of encouraging inspirational exchanges between Olympians, athletes, coaches and the young people at Fight for Peace.

The BOA will work with Fight for Peace to facilitate visits from Team GB athletes and training workshops for coaches at both of the Fight for Peace academies in London and Rio.

Additionally Fight for Peace will support British Olympic Association’s marketing campaign in the run up to Rio 2016 as they begin to build support for Team GB both in the UK and Rio.

Both organisations will also adopt a collaborative approach with the British Olympic Association’s youth engagement programme, Get Set; encouraging healthy, active lifestyles, communicating the Olympic Values and sharing content about preparations and plans for the Rio 2016 Olympic Games.

CEO of the British Olympic Association Bill Sweeney, said: “The BOA and Fight for Peace share a core belief – that sport can transform lives. This partnership will enable us to share expertise and resources, helping Fight for Peace to continue their great work and helping us to have a presence and voice in Rio as we prepare for the Games.

“We are looking forward to working with Luke and his team to ensure that Team GB has a positive impact in Rio and Brazil in the run up to, during and after the Rio 2016 Olympic Games.”

Luke Dowdney MBE, Founder of Fight for Peace, said: “It is an honour and pleasure to be working with the British Olympic Association. This is a fantastic opportunity for us to have access to the expertise and talent within the organisation and we are really excited about the opportunities ahead.

“We believe that this partnership will add real value to the work that we already do at Fight for Peace as it will help to drive awareness of the charity and also help to improve our sport performance programme which plays a vital part in attracting young people to our Academies and away from an alternative life of crime and violence.”