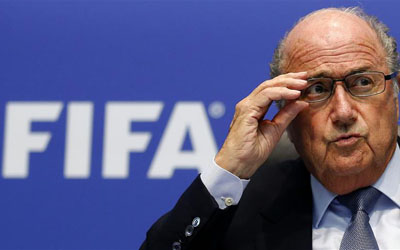 Fifa president Sepp Blatter has officially confirmed that he will stand for a fifth term in charge of world football’s governing body in an election in May 2015.

“I have announced to the Executive Committee…that I will accept the demands of different associations and federations (to stand for election) to serve FIFA for a fifth mandate, ask ” said Blatter.

The 78-year old has been president of FIFA for the past 16 years, but has received criticism in recent months from European football chiefs.

There is also the controversy surrounding the 2018 and 2022 World Cups and how the host nations were chosen.

UEFA president Michel Platini was keen to challenge Blatter for the presidency, but the chances of the Swiss being re-elected grew increasingly after Platini opted not to stand for election.

“First of all I’m not running – I’m at their disposal. FIFA is a service and I want to go on serving,” said Blatter.

“I have been contacted, I have been asked just before the (pre-World Cup) congress in Sao Paulo by five if the six confederations saying ‘please stay and be our president’ because, at the time at least, they say we have no other candidate.”

The presidential election will be held at the next FIFA congress in Zurich on May 29, 2015, with candidacy bids open until January 29.

Champagne and Michael Garcia, the former US federal prosecutor in charge of investigating allegations of corruption into the 2018 and 2022 World Cup bids, have been among those who called for the Garcia Report to be published this week.

Blatter however, claims there has been “no request” from any FIFA member to publish the report in full.

Hans-Joachim Eckert, chairman of FIFA’s adjudicatory chamber, is expected to make a statement on the findings in early November and will decide whether it will be published.

The Swiss said a working group will be set up to implement the ban which would come into effect following a ‘transitional period’.

“We took a firm decision that TPO should be banned but it cannot be banned immediately there will be a transitional period,” said Blatter at a news conference at the Executive Committee.

European football’s governing body UEFA previously warned that they would ban TPO unilaterally if FIFA did not act.