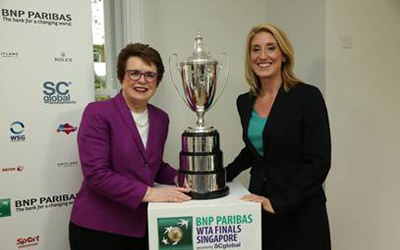 The Women’s Tennis Association (WTA) has announced that their Founder, Billie Jean King, will act as an Official Ambassador of the WTA Finals in Singapore.

King, an American former World No. 1 who won the inaugural WTA Tour Championships, is well respected for efforts in empowering women, equality and social change.

As Official Ambassador of the WTA Finals, she will encourage physical and emotional health for young girls and women throughout the Asia-Pacific region through community youth programs, educational forums and various promotional activities in Singapore.

In an official statement, King said: “The vision of every member of the Original 9 women professionals was that any girl, wherever she was born, could grow up to make a living from tennis if she was good enough.

“Holding the WTA Finals in Asia-Pacific for the first time is fantastic proof that our dream is thriving.”

Stacey Allaster, WTA Chairman & CEO added: “This is a historic Finals for the WTA that will drive the growth of women’s tennis for the next decade and to have our Founder, Billie Jean King, in Singapore to present the coveted Billie Jean King Trophy to the singles winner will be a historic, memorable and exciting moment for the players and fans in Asia-Pacific.”