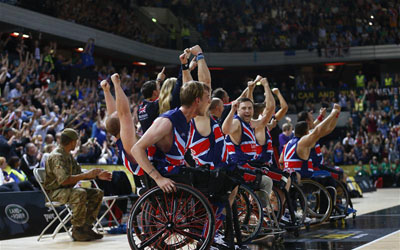 The Invictus Games Organising Committee has announced that they have begun the bidding process for the next Invictus Games in spring 2016 and summer 2017.

The Games, a sporting event which featured wounded former servicemen and women, debuted in London this year and proved a success.

The Invictus Games was established by The Royal Foundation of The Duke and Duchess of Cambridge and Prince Harry along with The Ministry of Defence and a request for proposal (RFP) has now been issued to interested parties from the 13 nations that took part for the next two editions of the games.

It has been decided that no events will take place in 2015 in order to give future hosts enough time to plan and raise funds for the next Invictus Games.

All bids will initially be managed and overseen by a newly established Transition Committee led by Sir Keith Mills.

Sir Keith Mills, Chairman of the Invictus Games 2014 Organising Committee and now chair of the Transition Committee, said: “We always knew we had something special with these Games, but the success of the event really did exceed all our expectations.

“So following extensive consultation and reflection, we have decided to explore options for the future through a transition committee and a new ongoing selection and oversight body.

“We very much hope that games will be held in 2016 and again in 2017, and although we will have very stringent quality standards, we are confident that suitable hosts will be found for these games.

“A number of conversations are now underway.”

Dave Henson, Captain of the British Armed Forces Team, said: “The Games have been an incredible success and I can speak for many other wounded, injured and sick service-people when I say we are very keen to see them being held again.

“The impact on all the competitors and their families has been unbelievable and I can’t overstate how much it will mean for these games to happen again. I am absolutely delighted to hear that plans are underway to hold them in 2016 and 2017.”

Prince Harry, President of the Invictus Games 2014 Organising Committee, said: “The Invictus Games was about inspiring people to overcome their challenges and raising awareness of the issues facing wounded servicemen and women on an international scale.

“I believe we achieved that as the public support for the inaugural Invictus Games was nothing short of phenomenal, and the impact it had on the competitors was unforgettable. But for every competitor at the first Invictus Games, there are 10 others who would benefit from having the same opportunity.

“I always hoped September’s Games would just be the beginning and I am delighted there is an appetite to build on the success of 2014 and broaden the concept in the future.”