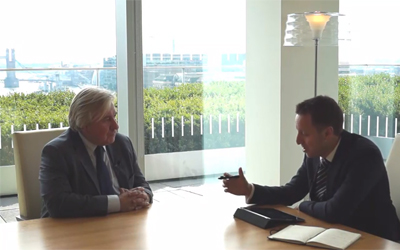 Vero Communications Chairman, Mike Lee OBE and Mediacom Director, Misha Sher have discussed the bidding process of the Brazil 2014 World Cup and the impact the tournament will have on the country’s society, exclusively on iSportconnect TV.

Lee commented that there was hardly ever a bidding process for the 2014 tournament, as it was South America’s turn and Brazil was the only genuine bidder.

Speaking on the political aspect which has plagued the build-up to the tournament, Lee mentioned the social climate in Brazil, with presidential elections coming up this year. Stating the issue of legacy as the main concern of the Brazilian population, Lee assured that what has been achieved and what the World Cup will bring to the country is extremely valuable.

“We wanted to make sure that every part of the country had a little piece of the World Cup,” said Lee on iSportconnect TV. “That brought challenges with it, in terms of construction, legacy and transport. But this is what Brazil wanted to do, to show that the tournament would reach the entire country. It’s big and it’s varied.

Lee added that there are certain issues that just don’t go away, but he is confident that the impact on Brazil will be huge in the near future: “You can’t judge it at this stage, before it’s even started,” added Lee. “You can’t even judge it at the end of the tournament. You have got to look five to 10 years down the line.”

The PR and bidding expert, who worked on successful Olympic bids for London 2012 and Rio 2016, also said that he did not believe in a plan B, or a backup host, bringing parallels with the Rio Olympics.

Watch the Road to Brazil 2014 Discussion Show on iSportconnect TV