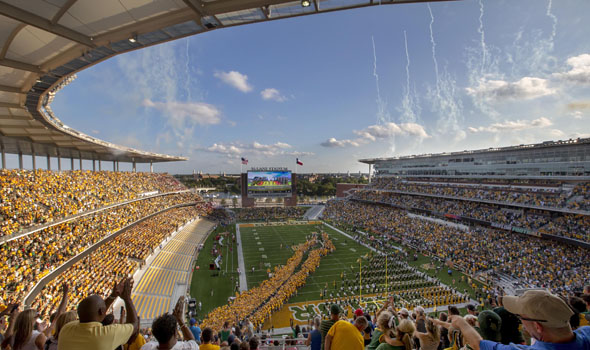 For many sports facility projects to come to fruition, the stars must align – necessary funding, a perfect site and a healthy dose of momentum must all be in place to move forward with a major renovation or a new stadium. This is every bit the case in collegiate football – a sport that boasts perhaps the most passionate fan base in the US.

The investment schools make in collegiate football stadiums continues to grow with the sport’s popularity – there are more than 103 million college football fans in the US. Between 2009-2014, almost half the 120 Division I schools undertook stadium renovation projects.  It happened at Baylor University, located in Waco, Texas.  A prominent university and an emerging powerhouse in college football, the university recently saw their vision become a reality with the opening of a new, $266 million on-campus football stadium in August. My colleague, Sherri Privitera, discusses the impact of the facility on campus and beyond.

Opening day at McLane Stadium was a scene we could only have imagined during the design and construction process. Dozens of boats cruised the harbor on the Brazos River; the amphitheater next to McLane Stadium was alive with hundreds of fans taking in the game-day revelry and the action on the water; kayakers and paddle boarders pulled up to the water’s edge to enjoy; and tens of thousands of fans crossed the pedestrian bridge from campus to the stadium to make history and partake in a new future for the university and the city. Waco, Baylor’s campus and the region was alive and there was an energy that felt indicative of a shift in how the city and the university will be seen in the future.

Baylor University is located just off I-35 in Waco – a quiet campus of 15,000 students positioned off one of the most heavily travelled stretches of interstate in the US  that sees more than 40 million pass by each year – and directly adjacent to the Brazos River – a previously ignored asset of the city. The campus, with its classic Georgian architecture, had been on the verge of establishing itself as one of the preeminent collegiate football schools in the country over the past few years. But it was previously geographically disconnected from the city’s downtown and played football games several miles from campus in Floyd Casey Stadium. While the new stadium would be designed to house Baylor’s football team, it was clear that it was intended to represent something far greater – an opportunity to solidify their relevance as a team, a university and a destination for visitors.

The 45,000 seat facility was designed to create connectivity between campus, the site and the city.  Its far-reaching impact is made possible largely because of the stadium’s site. With the stadium gates less than 150 feet from the water, and directly adjacent to the I-35 Corridor, it serves as the new front door for the university and for Waco. It visually and physically represents Baylor’s campus and is on a site millions drive by yearly, offering brand awareness opportunities for the university and a reason for visitors to stop and enjoy what Waco has to offer. The stadium has been lauded as having “the most beautiful setting in its sport” by USA Today and has been part of a visionary campus development strategy for the university.

The design of the stadium itself was also about more than the game at hand – it was seen as an opportunity to recreate a brand, shape a vision and develop a clear path for the future that would forever change the university and in fact the city.

Outside the stadium walls, features of the design create a unique experience for visitors that is unforgettable. An amphitheater with seating for hundreds lines the east side of the stadium, facing the Brazos Basin; Touchdown Alley comes alive with on-campus tailgating for thousands; a large plaza allows fans to congregate before the game and highlights the university’s history; and a large pedestrian bridge connects campus and student tailgating to the stadium – bringing fans on campus before the game and offering an iconic experience of crossing the bridge for which the stadium is sure to become known. While these design features are integral to game day, they have also made the Brazos River and basin more accessible for everyone all year-round. There is now easy access for visitors by car, foot or boat, which has shifted the experience of attending a game and created a central gathering point that will become home to events hosted by the city of Waco, community and the university.

The stadium has created one of the best game-day atmospheres in all of college sports – capturing the crowd’s energy, incredible views and offering great amenities – but it’s what happens outside the stadium walls that is truly special. With its connectivity to campus and downtown, McLane Stadium has become an authentic representation of Central Texas – of what the university, the city and the region will become and the experience that visitors, students and the community alike can come to expect.

Sherri is a Principal at Populous with 15 years of experience managing complex sports projects. Sherri has impacted more than 50 universities through her involvement in more than 65 projects over the years, which qualifies her as one of the leading women architects in collegiate athletic design.

Her expertise has influenced Populous’ philosophy on programming, the critical initial project phase that helps establish goals, project parameters, scope and budget. Sherri has written Populous’ programming standards impacting nearly every project the firm has encountered the past two years; she also maintains a database of industry standards and trends and educates Populous staff on that information. Sherri’s focus in this area helps set Populous apart as the industry leader for its unmatched knowledge of the intricate details of the various building.