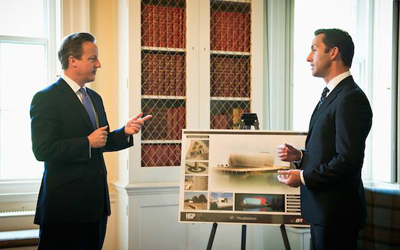 The Ben Ainslie Racing team in the America’s Cup competition has received a boost after the British government approved £7.5m (US$12.9m) in funding.

On top of this, Portsmouth City Council will give the team an addition £1.4m ($2.4m) to base the team along the south coast.

The government has claimed that 90 people would be employed at the base, creating more jobs for the people of Portsmouth.

In that statement, the government said Auckland had generated NZ$88m (£45m, $77.3m) for basing the Emirates Team New Zealand in their city.

“It will not only build on Portsmouth’s global reputation as a centre of marine and maritime excellence but will also deliver a real sporting and economic boost to the UK.

“It is a great example of our long-term plan – creating jobs as well as opportunities for young people to develop their skills through apprenticeships.”

Speaking on the news, Ainslie said: “Portsmouth has a great maritime heritage and we felt it was a natural home for the team’s permanent base in the UK.

“There is excellent access to the water for the team’s training and to host future America’s Cup events, with fantastic spectator viewpoints.

“We hope through our journey to bring the Cup home to Britain we will inspire more young people to get involved in the sport, along with supporting the growth of the marine sector in the Solent area to match the country’s Formula One innovation hub.”

However, questions have been raised as to whether the sum is fair considering substantial funding cuts to other sports.

Speaking exclusively to iSportconnect, Alan Seymour, Senior Lecturer in Sports Marketing, PR and Brands at Northampton University said: “The decision has to be questioned against a backdrop of many sports funding cuts, like Basketball as a prime example, and lack of grass roots support to local sports communities where we have things like playing fields being sold for example.”

Seymour added: “The legacy of 2012 could also be called into question. If we are to take what is normally the preserve of ‘commercial’ sponsorship territory, then aspects of this arrangement may not sit comfortable with many organisations and individual athletes, who see this as crossing these borders.

“For example, think of Ellen MacArthur and her sponsors like B&Q, but never to my knowledge were they underpined by government funding?”

Seymour questioned whether the move was a sign of “sporting elitism,” or if the “greater sporting family” would benefit as a whole. “A debate worth having in my opinion,” he concluded.