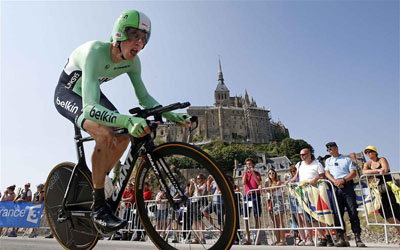 Belkin will no longer be showcased in cycling after they dropped their title sponsorship of their Dutch UCI World Tour team.

The search for a new backer has begun immediately, with the UCI World Tour team expressing its disappointment by Belkin’s withdrawal, which the electronics firm attributed to a change of brand strategy.

Belkin took over sponsorship of the team at the start of the 2013 season after they ran for a season as Blanco Pro Cycling in the wake of Rabobank’s withdrawal over doping controversies.

“While initial brand awareness results increased for the Belkin brand throughout Europe, the company strategy is to be more globally focused for all of the Belkin International brands.”

The team’s managing director Richard Plugge said: “We have full confidence in the future and expect to appear with a new sponsor on the shirt at the start of the 2015 season.

“We are a Dutch procycling team with an international image and World Tour status, therefore we expect to find a new title sponsor.

“We were already in conversation with additional sponsors and still have sponsorship opportunities open for the upcoming Tour de France.”