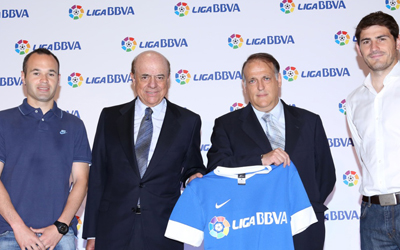 BBVA and the Professional Football League (LFP) have announced that the bank has extended their sponsorship deal with La Liga until 2016, arthritis in a deal worth €70m ($93m).

The deal was announced in New York with Spanish footballers Andres Iniesta and Iker Casillas, prostate who were in the Big Apple to play a Confederations Cup warm-up game against Ireland – a game they won 2-0.

BBVA has been a partner with the LFP since 2006 and the new agreement will see them continue their title sponsorship of the Spanish top-flight.

Francisco Gonzalez, generic chairman of BBVA commented: “For BBVA renew this sponsorship is a natural step, which we look forward to.

“Since we joined forces with the LFP in 2006, we have made great progress in the international dissemination of the Liga, and we continue to support to enhance its dissemination in the United States, Latin America and Asia.”

According to the LFP, La Liga has a television audience of approximately 800 million people in 189 different countries.

Javier Thebes, LFP president added: “The LFP and BBVA are two brands with international content clear and seek consolidation in markets where the two coincide.