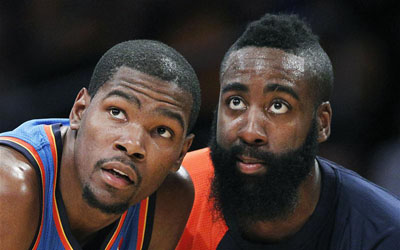 BBVA Compass today announced they have expanded their partnership with the NBA signing All-Stars Kevin Durant and James Harden to endorsement deals while also launching an NBA-branded online account.

The former teammates have inked global, multiyear deals as brand ambassadors for the bank. Durant and Harden will be featured in themed advertising that will tip off during NBA All-Star 2013 in Houston and run through the end of the NBA season.

BBVA Compass will simultaneously launch a hashtag (#Realfan) encouraging fans to post photos to Instagram and Twitter to display their “fandom” and promote the bank’s first national product.

The NBA Checking and Savings accounts are the first products built on the bank’s new core technology system, which provides the integration required to support a wholly digital banking product.

“Consumers want the same convenience in banking they find in other industries, and that’s exactly what this new account offers: banking anywhere, anytime and using a device they choose,” said Manolo Sanchez, president and CEO of BBVA Compass. “But what truly sets it apart is that the experience is as much about the NBA as it is about banking.”

“Sports is about passion, and this is a way to tap into that,” Sánchez said. “NBA Banking is more than just a way to bank. It’s a way for fans to show their team pride and love for the game.”