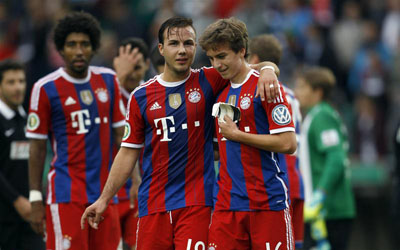 Bayern Munich to Facilitate Youth Soccer Development in US

The exclusive partnership will bring FC Bayern Munich’s Youth Academy, including its coaches, curriculum and official uniforms to more than 55,000 kids and 5000 coaches organised into over 75 soccer clubs supported by GPS across 11 states.

FC Bayern Munich’s Youth Academy coaches will be in the U.S. on a regular basis to facilitate a real know-how transfer to GPS coaches as well as providing ongoing access to Bayern curriculum via twice-monthly distributions coupled with a monthly conference call for GPS Technical Staff.

FC Bayern will also establish Player Identification Programs throughout the US to identify players to go on trial in Germany every summer and work with GPS to establish GPS Bayern National Teams who will compete in National and International events.

Wolfgang Dremmler, Head of FC Bayern Munich Youth Academy, noted: “The soccer education of a world champion player starts at a very young age, which is why it is important to provide kids with exceptional training early in their development, as we have done at FC Bayern Munich’s Youth Academy for decades.”

Rudolf Vidal, Managing Director of FC Bayern Munich U.S., commented: “We are excited to partner with GPS, a leader in the youth soccer space, on this first of many initiatives we will be undertaking to foster a deeper connection with our millions of fans living in the States, and all soccer fans in the U.S.”

Joe Bradley, CEO of GPS Massachusetts, added: “The fact that 5 players in the starting 11 for Germany at the World Cup came through the Bayern Academy speaks for itself. It is important to note that FC Bayern also has a professional women’s team and we look forward to the impact of this partnership on both our male and female players.”