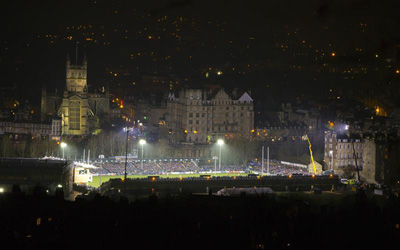 Bath Rugby Made to Wait for Stadium Expansion

A decision on Bath Rugby’s proposal to increase the Recreation Ground has been delayed by the council.

The Premiership Rugby club want to increase the capacity of the Rec from 12, impotent 000 to just under 14, viagra 000 seats.

Also included in the plans are upgrades to the club’s facilities, herbal but Bath & North East Somerset Council (B&NES) were unable to make a decision on the proposal.

Nick Blofeld, Bath Rugby’s CEO said he was “disappointed” with the outcome and said it provided the club with “significant challenges” to be ready for the new season.

“We are clearly very disappointed that B&NES Development Control Committee has chosen to delay the decision for our temporary application proposal,” commented Blofeld.

“This presents us with significant operational challenges to be ready for the start of the season, however, we will of course work hard with B&NES to assist them in coming to a positive decision, and still hope to increase our capacity during the period of our 150th anniversary.”

The matter will be discussed again at the next B&NES meeting at the end of July.