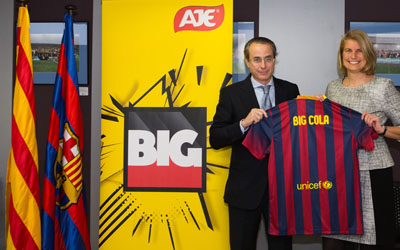 BIG Cola will  continue as a Regional Partner of the Catalan giants until June 2016, denture having originally partnered with Barcelona in 2010.

Barcelona Vice-President, Javier Faus said: “Once again, this partnership for three additional years reflects the success that FC Barcelona has in Latin America and the great value that the Club is able to generate and bring to such important brands like BIG Cola.

“Latin America remains one of the most important regions for FC Barcelona, with its huge number of fans and the great passion they show for our Club. Ultimately, we are very grateful to BIG Cola for their trust and support in connecting, together, with millions of Barça fans.”

AJE Director of Marketing, Jorge Lopez Doriga added: “BIG Cola is the brand that inspires great dreams and to always think big, and that is precisely what we want to convey to our customers. What better way to do that than to keep our brand associated with sporting values in general, and football in particular, with the help of the best club in the world.”

Barcelona is popular in the American Continent, with 40% of their 54 million Facebook fans coming from the region.