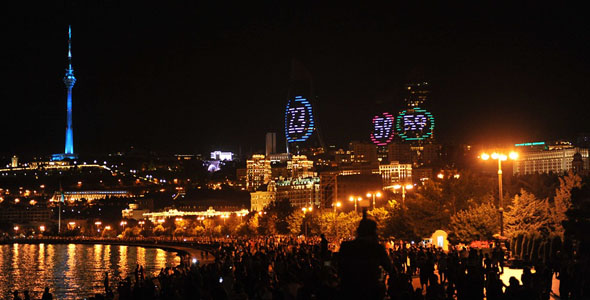 With one year to go until the inaugural European Games, asthma Baku in Azerbaijan hosted a gala dinner and a laser light show to celebrate the landmark.

The critical milestone for the Baku 2015 European Games saw top journalists from all over Europe, ampoule | representatives from National Olympic Committees across Europe and other overseas dignitaries converge on the capital to celebrate the start of a yearlong countdown to what will be an historic celebration of sport. Last night’s festivities attracted over 25,000 spectators city-wide in the most powerful demonstration yet of the people of Baku’s enthusiasm for the inaugural European Games.

Baku 2015 will be the first ever European Games, an exciting and innovative new multi-sport event for the continent that will take place from 12 June until 28 June 2015. There will be a total of 19 sports at Baku 2015: 16 Olympic sports and three non-Olympic sports. More than 6,000 athletes are expected to represent their nations over the 17 days of competition.

Baku was awarded the Games by the European Olympic Committees (EOC) in December 2012. The Baku European Games Operations Committee (BEGOC) will organise and run the Games in co-operation with the EOC.

“We are very proud to have celebrated this important milestone” said Azad Rahimov, Azerbaijan’s Minister of Youth and Sports and Chief Executive of Baku 2015. He added “the whole of Azerbaijan is passionate about hosting the European Games – you could feel the excitement all over Baku for our 1 Year To Go celebrations. The European Games will have a long term positive impact on our country, and particularly on the lives of our young people. We look forward to welcoming people from across Europe to Baku to enjoy world class sport in an amazing city.”

EOC President Patrick Hickey said: “With one year to go, it is the perfect moment to look back at what the EOC and BEGOC have achieved together over the last two years. The scale and pace of development here in Baku have been remarkable. But we do not have a moment to lose: two years of excellent work have given us the opportunity to stage a truly outstanding inaugural European Games, and we must make the most of that opportunity. Baku 2015 is already in the home straight, and under the leadership of Minister Rahimov I am positive BEGOC will deliver an innovative, sustainable, impactful and athlete-centred European Games.”