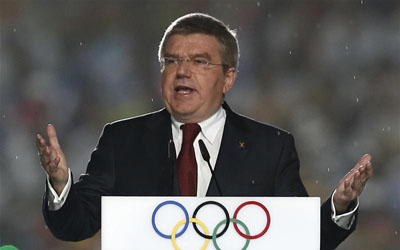 Bach Confident 2022 World Cup Will Not Clash With Winter Olympics

International Olympic Committee (IOC) President Thomas Bach believes FIFA will stick to its promise that the Qatar 2022 World Cup will not clash with the Winter Olympics.

A FIFA taskforce set up to investigate whether the tournament should be moved to the winter due to scorching temperatures in Qatar in the summer, is believed to be favouring a January and February World Cup in 2022 following a meeting in Zurich.

That will result in a direct clash with the Winter Olympics scheduled for 2022, to be held in Almaty or Beijing.

Speaking at the SportAccord IF Forum in Lausanne, Bach was optimistic that FIFA President Sepp Blatter will keep his promise.

“I have not heard about this but I am confident that the Winter Olympics and World Cup will not clash,” he said speaking to insidethegames.

November and December are alternative dates also being considered by the FIFA taskforce, which is believed to be favoured by Sepp Blatter.

But this option is opposed by major European football clubs and leagues, including those who play in the English Premier League, who have asked for FIFA to consider switiching it to May.

“We are getting closer to narrowing the dates for the FIFA World Cup to two options – January/February 2022 or November/December 2022 – but FIFA has also been asked to consider May 2022,” FIFA secretary general Jerome Valcke said.

“We will summarise what we’ve heard today and provide feedback to all parties in order for them to prepare for the next meeting as we progress towards a final decision.”

FIFA’s chief medical officer, Professor Jiri Dvorak delivered a presentation to the taskforce where he warned that there was a “highly critical risk” to players, officials, and fans if the tournament were to be staged in June and August in Qatar, which makes a winter World Cup seem almost inevitable.

“What I have said is that for the players, the accompanying staff and the fans the months June till August are highly critical in terms of risk, due to the climatic conditions in Qatar,” Dvorak told the taskforce.

“In May and September it is borderline when it comes to the temperature of high risk but from the medical point of view it is not recommended.”