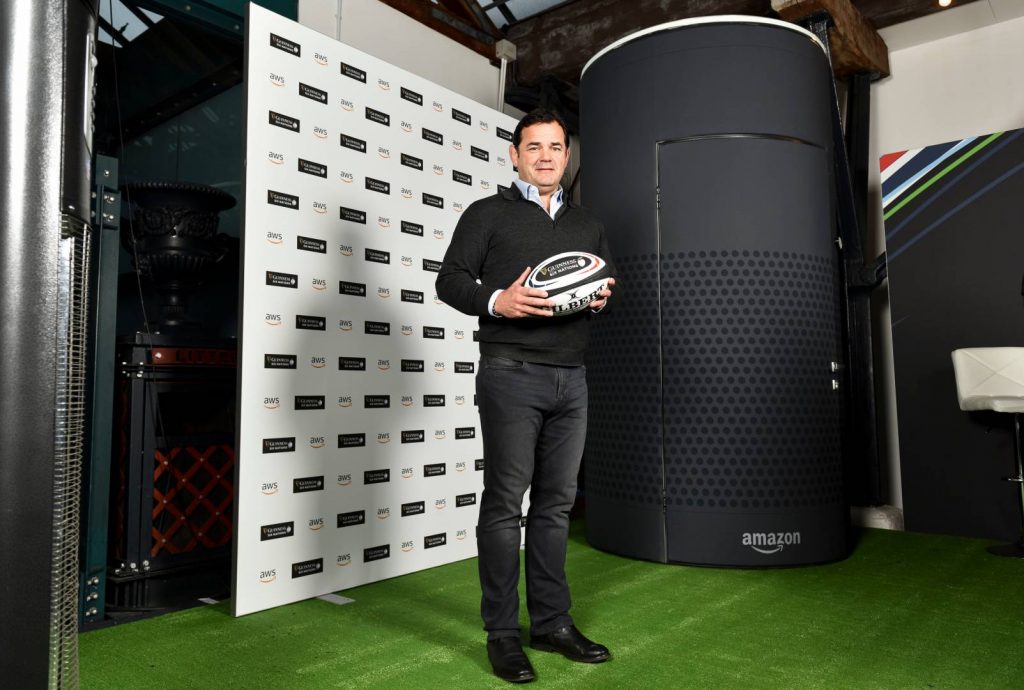 Amazon Web Services and the Guinness Six Nations have announced that they are introducing five new, real-time, rugby statistics to give fans deeper insights into on-field action than ever before.

The dynamic statistics powered by AWS, will take fans from their sofas and place them at the tactics board in the dressing room by revealing the nuances of each team’s plans, plays, attack, and defence for every game.

The five new statistics will join the seven launched during the 2019 Championship, which provided fans with insights into a range of key in-game events, including scrum analyses, play patterns, try origins, team trends, and more.

These statistics are generated by gathering live data from the games, streaming them into AWS to store and do analytics, and then delivering these insights back to the live broadcast for viewers in over 170 countries to enjoy.

In the 2020 Championship, fans will be able to view heat maps on where all the action is taking place on the pitch, metrics on rucking efficiency – helping to demystify one of the most complex areas of the game – as well as stats on balls won, impactful tackles, and crucial line breaks. This will help audiences understand which team has momentum at different stages of the game, how game plans evolve during a match, and areas of stress or opportunity for attack.

Working with Stats Perform, a data and analytics organisation, and the Amazon Machine Learning Solutions Lab, the Six Nations team built these new capabilities using Amazon SageMaker, a fully-managed service to build, train, and deploy machine learning models. Using advanced AWS cloud technologies, they are able to drive deeper analysis of data gathered during the game, providing fans with insights to better understand the split-second decisions made on the field.

The new 2020 statistics powered by AWS for the Guinness Six Nations Championship are:

Kick predictor – this stat employs advanced machine learning technology to show the probability of a kicker successfully scoring a penalty kick or try conversion (collectively, the “kick”). The calculation happens in real time, during a break in play while the kicker sets up to take a kick, and predicts whether a kick will be successful. It takes into account a number of real-time, in-game factors, such as the location (zone) of the kick in the field, the period of the game the kick is being taken, the current score, and if the kicking team is playing home or away. Additionally, it analyses other historical data, for example, the average success rate of the kicking player in the given field zone, during the Championship, and during the player’s entire career.

Visits to the 22 – the main aim of any team is to cross the try line and get the maximum amount of points out of an attacking opportunity. For some however, just keeping the scoreboard ticking over and accumulating points with penalties and drop goals is an equally valuable strategy. Whatever the plan of attack, visiting the 22-metre area in the opposition’s half is only worth it if you walk away with points. This stat will highlight the number of occasions a team has entered the opposition’s 22-metre area and how many points they have scored with the entries. The 22 entry will also be calculated for every phase of play, and not simply for crossing the 22m line on multiple occasions in a phase, with the aim of gaining deeper insight into how many opportunities a team creates, how long they stay in the attacking area, how many opportunities they convert, as well as how many opportunities are stopped by the defending team. This gives viewers deeper insight into how one team’s defensive strategy is superior to the opposition or equally, highlights another team’s attacking strategy and their differing game plan in this crucial area of the field.

Ruck and turnover locations – using data on ruck location and efficiency, a heat map of the pitch will highlight the action areas of each team. This will also visually establish where a team is stealing the ball or where a team is more or less effective on the field. This can provide vital insight to each team’s attacking strategy, unearthing key parts of the field they perceive to be a weakness to the opposition. Whereas previous stats only looked at the number and duration of rucks, this stat will bring deeper insight to the ruck and how it is used as a strategic tool for teams. TV broadcasters and commentators will also be able to explain and interpret the data to help fans understand where the game is being played and decipher the game plan of each of the coaching teams.

Dominant tackles – this stat outlines the defensive strength and structure of the teams. Dominant tackles put pressure on the attacking team as they lose field position and forward momentum, allowing the defending team opportunities to win the ball. They can also demoralise the opposition if they see their attacking line constantly being pushed backwards, which helps teams understand when they are winning the mental game as well as the physical game. By mapping out locations and percentage of dominant tackles, it’s possible to analyse the teams’ momentum at the gain line and whether they are going forward or backwards.

Power game (metres made and line breaks) – this stat determines the direct impact of a team dominating particular action areas, assessing its effectiveness at reaching and getting over the gain line, producing dominant tackles, and creating line breaks. The purpose of this stat is to show where a team is dominant, where a team is lacking, and potentially where the match is being won or lost.

“The introduction of the advanced statistics – powered by AWS – in the 2019 Guinness Six Nations Championship was just the start of how we are planning to change the game of rugby through advanced in-game analytics,” said Ben Morel, CEO, Six Nations Rugby. “This year will see the introduction of even more engaging and informative stats that bring fans even closer to the action. With these innovations, together with AWS, we are seeking to significantly enhance the viewing experience for all rugby fans by providing them with unique data-led insights.”

“We’re proud to help Six Nations place unparalleled technological innovation at the core of the rugby experience,” said Andy Isherwood, Vice President and Managing Director EMEA, AWS. “Rugby has always led the charge and embraced technology to positively evolve the game. For the first time, using advanced AWS technology, Six Nations fans will be able to see the probability of a successful conversion or penalty kick and many other game-changing insights, which will offer unprecedented understanding into the game they love. We are thrilled to continue working alongside one of the world’s most iconic sporting tournaments and to positively enhance the game for rugby fans around the world.”