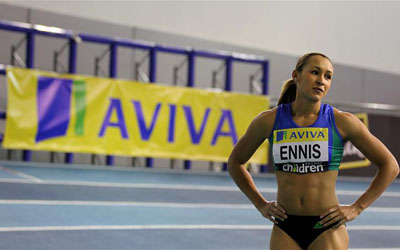 Insurance giant, Aviva has confirmed it will end its sponsorship of UK Athletics (UKA) after 13 years.

iSportconnect earlier this month reported Aviva were unlikely to renew their sponsorship due to UK Athletics new sponsorship model which now targets a number of sponsors instead of one major backer. The company has now confirmed this with their contract with UKA set to end at the end of 2012.

The partnership between Aviva and UKA spanned all levels of athletics and involved millions of pounds of investment over the years.

Aviva’s chief marketing officer, Amanda Mackenzie, said: “We will have had 13 great years with UK Athletics and it has been a fantastic partnership.

“The support we’ve given has helped athletes such as Jessica Ennis and Jonnie Peacock reach the very top of their sport, with stellar performances in London over the summer.

“The sponsorship has also enabled us to build awareness of the Aviva brand among the millions of sporting fans across the UK and we feel now is the right time to pass on the baton to another organisation. It will no doubt prove as successful for them as it has for us.”

UKA’s chief executive, Niels de Vos, added: “Aviva has been a superb partner for UK Athletics for 13 years. Without their support over these past years, there is no doubt that athletics would not find itself in the robust good health that it does – as the country’s number one Olympic and Paralympic sport with a vibrant commercial programme of televised events and activities from the school playground to elite preparation camps.”