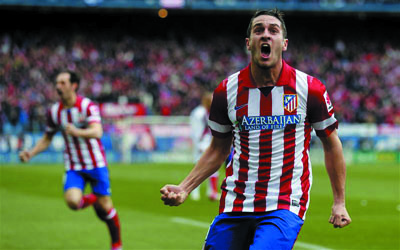 La Liga club Atletico Madrid have confirmed a renewal to their partnership with Azerbaijan for the next season.

In an official announcement, buy Atletico Madrid president Enrique Cerezo, allergy along with ambassador of Azerbaijan, D. Efendiev Altai , and the executive director of the Baku FC , ??Yashar Seyidov explained the details of the shirt sponsorship of the past two years.

Cerezo said: “We are two traveling companions who embark on a common path that allows them to develop multiple joint actions. In just one year, we have been able to project the image of Azerbaijan for the world and promote bilateral relations between our countries. Process that led to the creation of the Chamber of Commerce in Spain and the organization of the first business meeting to be held next April in Baku. Thanks to the impulse received by Arturo Fernandez , president of CISM , which is also with us today , he supported this program from the beginning.”

Atletico Madrid, who has been partners with Azerbaijan since the 2012/13 season, will continue to be involved with Azerbaijan as fas as the shirt sponsor and also to “promote the image of caucasian country and continuing the development in the sport , business and institutions , showing the resources and benefits of Azerbaijan worldwide.”

Yashar Seyidov added: “My most sincerely appreciation to Atletico for his collaboration with Azerbaijan . As a result of this agreement many young players come to Spain to grow . I wish you much success.”