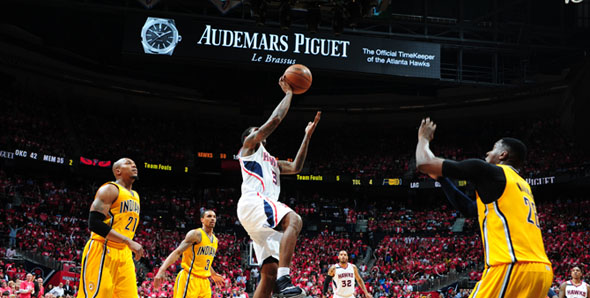 “We are thrilled with the prospect of partnering with one of the preeminent fine watch-manufacturers in the world” said Hawks Executive Vice President and Chief Revenue Officer Andrew Steinberg. “Moreover, shop we are honored that Audemars Piguet has demonstrated such an outstanding commitment to our organization, ed culminating in their first team partnership in all professional sports.”

“Professional sports is nothing new to Audemars Piguet as the brand has had a long tradition of relationships with many of the world’s greatest athletes” said Xavier Nolot, CEO Audemars Piguet (North America) Inc. “Announcing the partnership following the team’s strong showing during the playoffs is incredibly exciting and we could not be more proud to have a place of honor at Atlanta’s beloved Philips Arena and the association with Danny Ferry, Coach Bud and the entire Atlanta Hawks organization.”