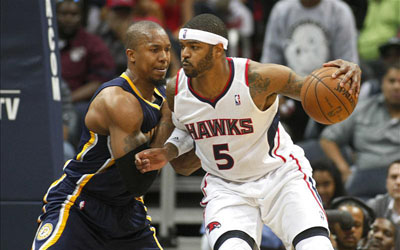 The  National Basketball Association’s (NBA) Atlanta Hawks have announced that, CBS RADIO’s SportsRadio 92-9 The Game will become the official flagship station of the team.

As part of a multi-year agreement, beginning with the 2013-14 season, 92-9 The Game will broadcast all NBA regular season and postseason basketball games played by the Atlanta Hawks, all pregame and postgame broadcasts and create dedicated Hawks programming with their on-air basketball talent including Rick Kamla, Sam Mitchell and Dennis Scott.  Long-time voice of the Atlanta Hawks, Steve Holman, will continue his role as play-by-play announcer with 92-9 The Game, adding to his 2,050th consecutive game broadcast.

“Entering into a partnership with 92-9 The Game will create exciting opportunities for both the Atlanta Hawks and our new flagship,” said Bob Williams, President, Atlanta Hawks and Philips Arena. “CBS RADIO’s sports talk investment in the greater Atlanta market, the NBA and the Hawks, boasting one of the most powerful signal strengths in the Southeast, means more Hawks fans than ever will be able to follow and support our team and interact with the basketball savvy on-air talent at 92-9 The Game 24 hours a day, year-round.”

“We are very excited to partner with the Atlanta Hawks organization,” said Rick Caffey, Senior Vice President and Market Manager for CBS RADIO Atlanta.  “Danny Ferry, Coach Bud and the Team are launching a new era of Hawks basketball and 92-9 the Game is very proud to play a part in bringing the vivacity of the NBA to fans across the entire metro of Atlanta.”