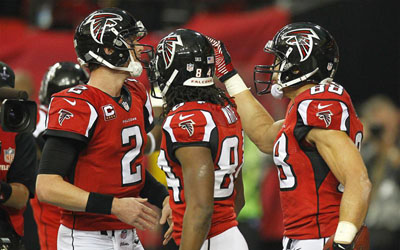 King’s Hawaiian Bakery West announced today their sponsorship with the Atlanta Falcons for the 2014 season.

Through the sponsorship, King’s Hawaiian was the presenting sponsor of the “Grill with the Falcons” event on Saturday, June 14th. The annual event will took place at the Mall of Georgia and will include a tailgate competition, food giveaways, and meet and greets with Falcons’ players and cheerleaders.

Additionally, King’s Hawaiian will sponsor a sweepstakes in Atlanta and the surrounding communities between August 17 and September 13. Entrants will be given the chance to win an all-expense paid trip to Glendale, AZ, to see their favorite football players at the 2015 all-star game.

“As a family-run business with local operations in the Atlanta area, King’s Hawaiian embodies the hospitality and energy that the Falcons look for in a partner. Their products are family favorites across the nation and we are proud to bring their outstanding breads to the attention and tailgates of our fans,” said Tim Zulawski, Vice-President of Sponsorship Sales and Services, Atlanta Falcons.

“As we expand our operations in Georgia, we look forward to bringing the King’s Hawaiian signature Aloha spirit to the Falcons Nation,” said Erick Dickens, Vice President of Marketing, King’s Hawaiian. “We are ready to join the Atlanta community this fall as they celebrate a successful football and tailgate season.”