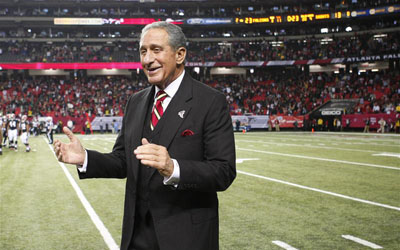 Atlanta Falcons owner Arthur Blank is ‘optimistic’ that the NFL will have a franchise in London in the future and even suggested it could be more than one.

The Falcons gave up one of their home games in 2014 to play in London which will be apart of three games in the city this year. Blank believes the NFL’s European expansion is only just beginning to escalate.

“The games in London, I think are a tribute to the NFL, a tribute to the fans there, the quality of the game — and I think that it’s proved conclusive that fans will come out when they see the real players playing games that are really meaningful, as opposed to NFL Europe,” Blank told The MMQB’s Peter King. “So I think — and all three of the games for 2014 sold out immediately, 240,000 tickets — the league, as you know, has been in discussion about a fourth game, in discussion about games beyond that. There’s been discussion about potentially having a franchise in London. I’m very optimistic.”

Blank sees adding games in London as just the start. The owner imagines that, in the future, London could be home to at least one NFL team.

“I think it will start with an increased number of games,” he said. “That will be translated into a very successful series of games, and eventually, I think a franchise. And maybe more than one. London’s a big city.”