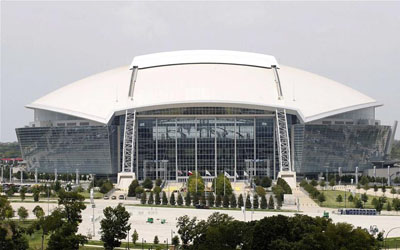 The event will take place in Arlington, Texas, on March 7, 2015 and is the USA’s most prestigious international invitational and part of the International Gymnastics Federation’s all-around World Cup series.

The AT&T American Cup features the world’s best gymnasts in a one-day all-around competition. The Nastia Liukin Cup, which features many of the country’s top Junior Olympic female gymnasts, will also be held at AT&T Stadium on March 6, 2015.

“AT&T Stadium will be a truly unique stage to showcase gymnastics as the Road to Rio heats up in 2015,” said Steve Penny, president of USA Gymnastics. “Hosting the event at AT&T Stadium is important to us for several reasons: AT&T, one of our premier corporate partners, is based here and its name is on the stadium and the event itself; this will be the first time this event has ever been held in a football stadium; and Texas has one of the largest gymnastics communities in the country. The AT&T American Cup showcases the best in gymnastics, and this facility is definitely world class.”

“We are excited to have the opportunity to showcase some of the finest gymnasts in the world the year before they head to the 2016 Olympics in Rio,” said Charlotte Anderson, executive vice president and chief brand officer of the Dallas Cowboys. “We are always looking for new ways to bring the greatest sporting events and athletes to AT&T Stadium, and the success of U.S. gymnasts in recent years on the global stage makes our venue the perfect place to host an event of this kind.”