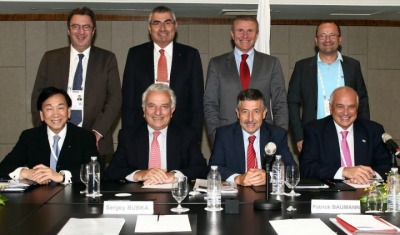 During its meeting held in Lausanne today, cialis the General Assembly of the Association of Summer Olympic International Federations (ASOIF) re-elected Francesco Ricci Bitti as its President for another 4-year mandate.

The Italian has been leading the organisation since 2013 and is Honorary Life President of the International Tennis Federation (ITF).

proposed to serve a second term as ASOIF representative on the Executive Board of the International Olympic Committee (IOC), to be formally ratified by the IOC in August.

The tool comprises a comprehensive set of five key principles and 50 indicators that are tailored to the specific characteristics and needs of sport organisations.

Commenting on today’s discussions, ASOIF President Francesco Ricci Bitti said: “I am very happy our members agreed on the need and value of our new assessment tool.

“Governance is a very important and pressing topic and, as we are all aware, there is no time to lose.”

“Our aim is to help our federations to protect the integrity of their organisation and sport in the best way possible.”

Regarding the fight against doping, the General Assembly heard an update about the anti-doping study commissioned by ASOIF earlier this year.

The research explores the current anti-doping activities and processes of the ASOIF members; the related expenditure; and the current IF practices surrounding athletes’ health and safety.

First results will be available in June and are expected to deliver valuable input to the ongoing discussions about the potential creation of an independent body for testing.

The General Assembly also listened to a presentation of the World Anti-Doping Agency (WADA).

Furthermore, the General Assembly voted for an amendment of the ASOIF statues which will enable

IFs “governing sports included within the events programme for a specific edition of the Summer Olympic Games” to become “Associate Members”.

Last year, the Organising Committee of Tokyo 2020 proposed 18 additional events from five sports to the IOC for inclusion at their Games, with the final decision to be taken by the IOC this summer.