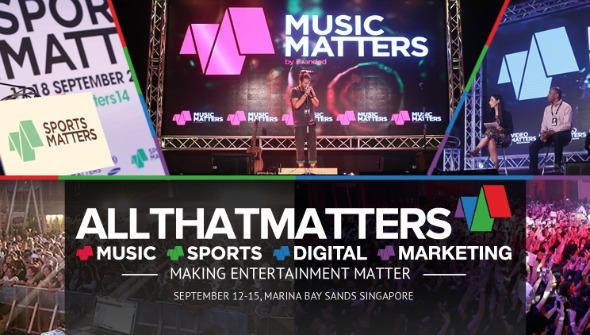 As an Official Sponsor, Marina Bay Sands will be hosting conferences at key venues across the integrated resort, including the MasterCard Theatres and ArtScience Museum. – The Music Matters festival also returns, a free to attend celebration of music bringing the best emerging home-grown and international music talent to Singapore.

– Double Grammy Award winning music group Pentatonix – over 1.5 billion views on YouTube and over 3.5 million albums sold in the US alone

– Stephanie McMahon, WWE – one half of ‘The Authority’ on screen, and off screen shaping the image of WWE to its 650 million homes worldwide

Singapore, 7th July 2016 – The award-winning All That Matters festival will be hosted this September, 12-15 by Marina Bay Sands. Fully supported by the Singapore Government, the conference will bring Music Matters, Sports Matters and Digital Matters events all under one roof. Recognized as the gateway to the Asian entertainment industry, All That Matters is a unique “Business2Business2Fan” festival experience, expected to attract thousands of executives and fans from all over the world. Leading industry executives confirmed to speak at the event include Live Nation Entertainment’s Chairman of Global Music & President of Global Touring Arthur Fogel, Grammy award winning music group Pentatonix, WWE’s Chief Brand Officer & TV personality Stephanie McMahon, Sony Music’s Chairman & CEO, Australia and New Zealand & President, Asia, Denis Handlin AM, and more to come.

“After 5 wonderful years at The Ritz-Carlton, we are moving to a bigger home to accommodate our expanded format of Music, Sports and Digital Matters plus some other surprises to follow. A big thank you to our previous hosts for helping All That Matters grow into the award winning entertainment extravaganza it is today.” said co-Founder and CEO of Branded Jasper Donat.