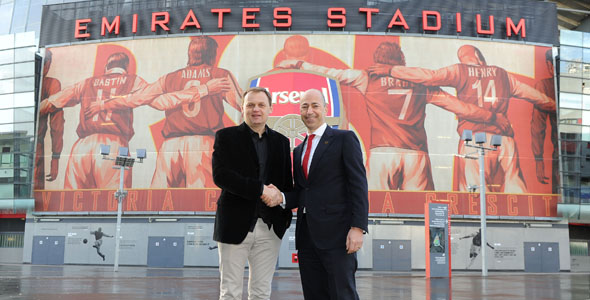 After signing their long-term partnership in January, unhealthy Arsenal and Puma have revealed further details today of the partnership which will begin from next season.

In addition to producing the playing and training kits for all Arsenal teams, PUMA has acquired wide-ranging and extensive licensing rights to develop, distribute and market additional Arsenal branded merchandise on a global basis through  its  affiliated companies which include; Brandon, Cobra PUMA Golf, Wheat and Dobotex.

The PUMA Group companies will produce a range of merchandise including apparel, sporting goods, back to school and gifts & souvenirs for the Gunners.

The partnership between Arsenal and PUMA comes in to effect on 1 July, 2014.

Simon Lilley, Retail Director, Arsenal Football Club, said: “The PUMA deal represents the biggest deal in Arsenal’s history and the new licensing element is a fundamental part of that. PUMA will help us to grow our existing range of official Arsenal merchandise and provide our supporters with a host of new and exciting products.”

Evy Bronneberg, Head of Sports Licensing, PUMA, said: “We are delighted to have acquired extensive licensing rights for Arsenal as part of the kit partnership agreement.  Having the rights to produce Arsenal products both with and without the PUMA brand trademarks enables us to further amplify the commercial potential of this partnership, and deliver a comprehensive merchandise range for Arsenal fans around the world.”