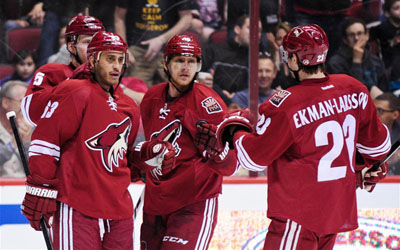 Arizona Coyotes have announced the appointment Gregg Olson as the team’s Chief Financial Officer and John Pierce as the club’s Chief Marketing Officer.

Olson joins the Coyotes from SMG, the worldwide leader in venue management where he served as one of the organization’s Regional Vice Presidents to its Stadium and Arena Division for the past year.

Prior to that, Olson served as Executive Vice President and Chief Financial Officer for the Portland Trail Blazers (NBA) organization. Olson directed all day-to-day activities for the Trail Blazers’ finance department and oversaw all human resource functions and activities. In addition, he managed negotiations of all employee benefits programs, and directed all areas of risk management.

Olson began his sports management career in 1985 as Director of Finance for the Cleveland Indians, and was Executive Vice President and Chief Financial Officer of the National Hockey League’s San Jose Sharks before joining the Trail Blazers organization.

Pierce joins the Coyotes from the United States Olympic Committee (USOC) where for the past eight years he served as the Managing Director, Marketing & USOC Productions. He led a team in the strategy development and execution of USOC digital media, broadcast and marketing activation programs that helped grow the Olympic brand, build engagement among fans and offered opportunities for sponsor activation. Pierce managed the USOC’s relationship with NBC Sports, helping NBC maximize its Olympic rights across advertising sales, marketing, affiliate sales, production, and programming divisions.

From 2000-2006, Pierce spent six years at The Walt Disney Company as the organization’s Director of Marketing & Creative Content. Pierce led marketing and communications for the Disney Regional Entertainment division of The Walt Disney Company and helped build the ESPN Zone brand, leading a talented team that developed programs to create and enhance guest/fan interest in the ESPN Zone restaurant concepts. In 2004, he was selected to lead the development of the marketing plan and grand opening of the World of Disney store in midtown Manhattan.

“We are very pleased to add Gregg and John to our executive management team,” said Arizona Coyotes Co-Owner, President and CEO Anthony LeBlanc. “Both individuals bring a wealth of knowledge and experience to our organization that will help drive our future success.”