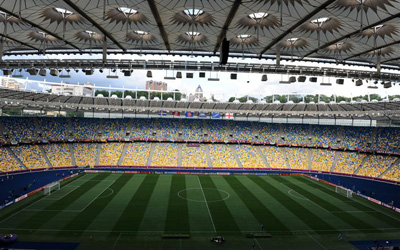 Violent anti-government protests in Ukraine have forced UEFA to move the Europa League clash between Dynamo Kiev and Valencia to Cyprus.

The first leg of the Round of 32 will be played on Thursday 20 February at the GSP Stadium in the Cypriot capital of Nicosia, order at 8pm local time.

UEFA had earlier said they were monitoring the situation in the Ukrainian capital, where the protests have become increasingly more violent.

An official statement from UEFA said: “UEFA today decided to change the venue of the UEFA Europa League match between FC Dynamo Kyiv and Valencia CF which was scheduled to take place on Thursday 20 February at the NSK Oliympiyskyi stadium in Kyiv, due to the security situation in the Ukrainian capital.”

Valencia president Amadeo Salvo agreed with the decision and added: “It was very difficult to play in Kiev. We provided security but there are many contingencies that cannot be controlled and it is best to play on a neutral field.”

English Premier League club Tottenham Hotspur are also due to play in Ukraine on Thursday, 220 miles away from the capital in Dnipropetrovsk.

Due to the likelihood that fans will travel through Kiev, the north London club released a statement that read: “It has been widely publicised recently that the political situation in Ukraine has led to many demonstrations; particularly in the city of Kiev and those fans that are travelling via Kiev should take extra care. You should avoid all demonstrations and public gatherings as even peaceful protests can be unpredictable.

“We are aware that a number of our fans will travel to Dnipropetrovsk via Kiev and you should take extra care when in public areas and if travelling by train, keep all your belongings together and in sight at all times.”