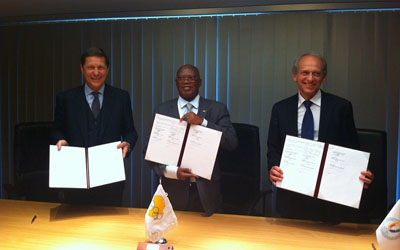 Each of the representatives underlined how this MoC will strengthen links between Africa and Russia and will benefit their respective sporting legacies.

“I am delighted to have signed this MoC with ANOCA and RIOU on behalf of the Russian Olympic Committee, tadalafil as it opens the door wider for collaboration on sporting projects and sports education. Russia is currently embarking on a decade of sport which will see some of the world’s most seminal sports events come to Russia, such as the Summer Universiade in Kazan in July, the World Championships in Athletics in Moscow during August, the 2014 Olympic and Paralympic Winter Games in Sochi, and  the FIFA World Cup in 2018. All of them will create a significant and rich legacy here in Russia and the MoC will ensure our experience and knowledge is transferred to our African colleagues for them to share the benefits as well,” said ROC President Alexander Zhukov.

ANOCA President General Lassana Palenfo also highlighted the importance of the MoC: “Africa has a proud sporting history with a population eager to participate in more sports and appreciative of major sports events. Only three years ago Africa staged its first ever FIFA World Cup and we are determined to play host to other sporting events of a similar scale. Signing this MoC with the ROC and RIOU will bring Russia and Africa closer together, helping us share best practice knowledge and learn about different approaches to sport.”

For RIOU, Professor Belousov said that the University will help the two parties to expand the interstate relations in sport:

“RIOU will become an effective conduit for extending the ties between Africa and Russia. The key task of our University is training top class specialists who will become true leaders in sport and will be able to work in any country of the world.  Through our state-of-the-art University campus in Sochi and via a proactive outreach programme we will disseminate major sporting event knowledge within Russia and throughout the Olympic family.

“As part of this MoC, I am delighted that ANOCA has accepted two scholarships of The Vladimir Potanin Foundation for our inaugural MSA intake, and we look forward to welcoming the recipients through our doors this September.”