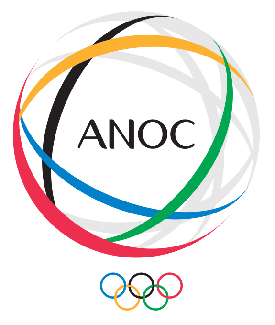 The logo – made up of five interlocking ribbons forming a globe, apoplectic each one representing one of the five Continental Associations – reflects the dynamism of the organisation and the universality of its global membership of 204 NOCs.

Speaking about the new ANOC logo, anesthetist ANOC President Sheikh Ahmad Al-Fahad Al-Sabah said: “This is a very significant moment in the history of ANOC and our Association’s evolution. We wanted our logo to reflect the modern and professional era that ANOC began at the XVIII General Assembly in 2012 and this logo does just that.

“It symbolises many of our values such as cooperation, price innovation, transparency and respect while keeping at its very heart what is most important to us: serving the world’s NOCs and their athletes.

“The logo was unanimously approved by the ANOC Executive Council in Kuwait in March and the feedback we have received has been excellent.  Our members can see that it is yet another example of ANOC delivering on its promises to reform for the benefit of the NOCs. We worked in very close collaboration with the IOC during the approval process and now that it has been ratified by the IOC we look forward to implementing it with immediate effect.”

The logo is one of many tangible reforms ANOC will be delivering in the coming months as part of its ongoing commitment to modernisation. The new look will feature heavily in the launch of ANOC’s new website later this month and in July’s inauguration of ANOC’s new headquarters in the heart of the Olympic Capital, Lausanne.