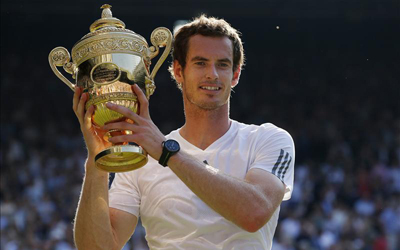 The long term investment business company will replace RBS as a sponsor of the reigning Wimbledon champion.

The partnership, link which will see Andy wear a Standard Life logo on his playing arm for all tournaments, advice will begin on the 23rd of June, health the first day of the 2014 Wimbledon Championships.  Murray, who is also an Olympic Gold medallist, competes in events in all of Standard Life’s key markets.

Standard Life Chief Executive, David Nish, commented from the Company’s headquarters in Edinburgh: “Andy is a world-class athlete who has succeeded at the very top of his profession through a combination of strong performance and a commitment to excellence.  These qualities, along with his dedication and ambition, are very important to Standard Life and its people. He is an inspirational individual and we are excited to be beginning this relationship with him.”

Andy has a social media fan base of over 7 million, a combined worldwide TV audience of over 1.5 billion, and participates in 16-18 tournaments across the globe each year, which will significantly increase the Standard Life Group’s brand exposure.

Andy commented on the new deal: “I’m very excited to be working with Standard Life. I’ve taken my time to find the right partner, as it was important to me to find a company that shares the same values, and also understand the demands of my sport.  Standard Life started in Scotland, and are now operating successfully around the globe, and there are many parallels with my own career and story as a player. I’m looking forward to the next three years, and hopefully beyond.”