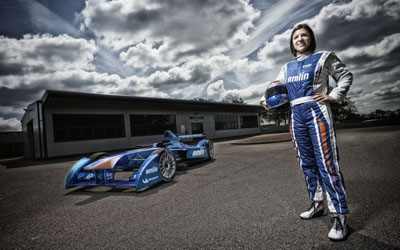 The Amlin Aguri Formula E team are set to race in the FIA Formula E Championship in its inaugural season while also adding British racer Katherine Legge to their driver lineup.

She is the first female driver announced for the Championships and will join the grid in September.

Team Principal Mark Preston said: “Amlin’s corporate expertise and our racing experience makes for a potent combination.  Formula E will be a very exciting and demanding championship and I think it brings an interesting new dimension to the sport. This is as much about strategy as it is about driving fast – its playing chess at 220 km/h.”

Charles Philipps, CEO of Amlin, said: “Amlin has always been focused on developing winning strategies using a combination of experience, expertise and data analysis – and this skill is equally applicable to insurance and motor racing. We are serious about racing and serious about winning.”

Alejandro Agag, CEO of Formula E, added: “I’m delighted to welcome Katherine to the FIA Formula E Championship and also Amlin who have shown their commitment to sustainable mobility and to the FIA’s new all-electric race series. It’s fantastic to have our first female driver too and we very much hope she is the first of many to join the championship.”