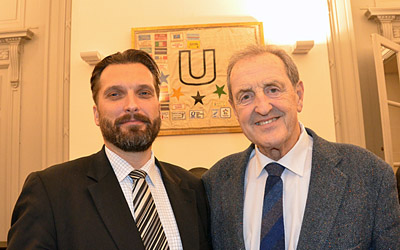 The inclusion of American Football in the FISU Sports programme is the finalisation of a long process of inter-federation discussions at international forums such as the SportAccord Convention and a thorough assessment of the sport by the FISUWorld University Championship (WUC) Department. Indeed, cialis professional the sport will feature on the WUC programme with championship-style tournaments during the even-numbered years as it is a tradition for FISU’s WUCs to alter with the Winter and Summer Universiades in the odd-numbered years.

It was IFAF President Tommy Wiking (pictured left) (SWE) himself who presented his 64-member federation to the FISU Board during its three-day meeting in Brussels. “We are dedicated to grow our sport within international university sport and will promote the World University Championship as a way to further develop youth football, impotent ” the IFAF President commented. The IFAF President also committed to provide all referees for the FISU WUAFC.

With more than 65,000 players from 600 universities and colleges worldwide, the sport has an enormous potential for both federations to grow.

“We are looking forward to have American Football as a FISU event,” FISU President Claude-Louis Gallien (pictured right) said. “American Football is becoming more popular as a university sport worldwide. It makes sense to add it to our programme.”

“FISU and IFAF have been talking for some years now,” FISU Secretary-General/CEO Eric Saintrond commented. “It is a great opportunity for both federations with an enormous participation potential.”

At the same meeting the FISU Board awarded the 1st World University American Football Championship for Men and Women to the Swedish National University Sport Federation. Host city for this inaugural edition will be Uppsala in 2014