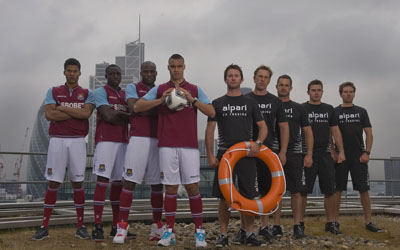 Team Alpari FX was launched at the Alpari offices in London and a demonstration was set-up to bring together the new team and another Alpari partner, clinic West Ham United.

Hammers players Mohamed Diame, Winston Reid, Guy Demel and Jordan Spence joined in with the sailors to showcase their football and sailing abilities.

Alpari has been the official sponsor of West Ham United since 2011 and became their principal sponsor earlier this year.

David Hodge, Chief Marketing Officer, Alpari said: “We are keen to support teams with game-changing potential and we feel Team Alpari FX and West Ham United have the necessary determination to succeed in shaping their sports.

“Both teams attract a large international audience and this will help Alpari reach out to supporters who can identify with the values that the teams share with us and our traders.”

Adam Minoprio, skipper, Team Alpari FX added: “We’re delighted to team up with Alpari for the 2013 season of the Alpari World Match Racing Tour and join the other high-profile teams Alpari sponsors such as West Ham United.

“Having visited Alpari’s headquarters today, I feel excited about what the forex broker can offer the team and the sailing community.”

Alpari are also the title sponsor of the World Match Racing Tour and their Executive Director, James Pleasance commented: “It is fantastic to see Alpari activating their sponsorships in both football and sailing.

“Today’s announcement of Team Alpari FX is a perfect addition to their sponsorship portfolio and Adam and his team are certainly hungry for success on this year’s Tour – they will be a team to watch for sure.”