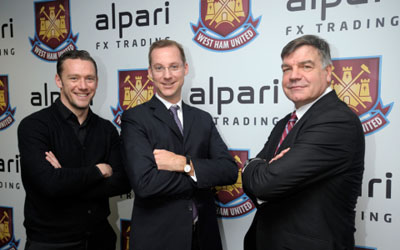 Under the terms of the three-year, multimillion-pound deal, Alpari will become the club’s new Principal Sponsor and their logo will adorn West Ham shirts from the start of the 2013/14 season.

This latest agreement follows the existing naming rights of the Alpari Stand at West Ham’s Boleyn Ground. The association between the two organisations dates back to 2011, when Alpari became an official sponsor of the club.

Karren Brady, Vice Chairman, West Ham United, said: “We are enthused and excited to enter into this new partnership with Alpari. This landmark deal, along with a host of other significant strides forward our business has made recently, is yet further evidence of the growth we have witnessed and I can only see things getting better.

“This partnership demonstrates Alpari’s belief in our vision and ambition for the club and I know they are excited about how the sponsorship can build their brand.”

West Ham United Commercial Director Barry Webber added: “A lot of hard work has gone into the completion of this agreement and we are delighted to have stepped up our relationship with Alpari.

Daniel Skowronski, Chief Executive Officer, Alpari (UK) Limited, commented: “Alpari is a leading global forex trading provider with significant growth ambitions. The Barclays Premier League is a truly global phenomenon with broadcast distribution now reaching in excess of 700 million households per season. Taking our partnership with West Ham United one stage further to Principal Sponsor was a logical step as we continue to build awareness for our products on the world stage.”

The new announcement comes after the news that West Ham’s existing shirt sponsor, SBOBET, would not be renewing the partnership.

Bill Mummer, SBOBET executive director, said: “We have enjoyed a mutually beneficial relationship these past four years during which SBOBET and West Ham United have each gained a heightened level of global exposure, particularly in Asia. The time has now come for both parties to review and refresh their sponsorship programmes.”