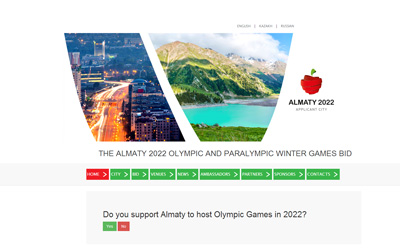 The organisers of the Almaty 2022 Winter Olympic Games bid have launched their new website.

Organisers released the website, which they describe as a “window to the world,” just days before the International Olympic Committee (IOC) decides which cities will go through to the next candidate phase.

Timur Dossymbetov, secretary general of the National Olympic Committee of the Republic of Kazakhstan said: “Launching this website is something special.

“It´s the next step on our journey – to open a window to the world and a window for the world to find out more about Almaty, Kazakhstan and our tradition in winter sport.

“We are a young country but our winter sports tradition has already a long tradition certainly comparable to most winter sport countries in the world.

“But Almaty is like a flower, it´s opening its blossoms one by one.”

The city is amongst the favourites to be awarded the Games and is in competition with Oslo and Beijing.

The grim reality for the IOC is that the 2022 Winter Games seem to be unpopular amongst potential bidders.

Lviv, Ukraine dropped their bid on Monday dues to the ongoing political unrest, whilst Krakow’s bid was aborted when the people of the Polish city voted against it.