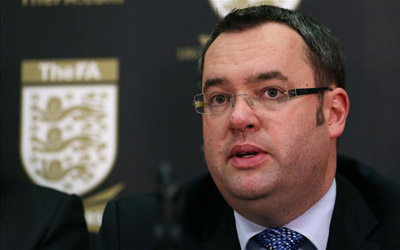 Alex Horne to Step Down as FA General Secretary

Alex Horne will step down as FA General Secretary on 30 January 2015 it was announced today.

He will leave his position after 11 years at The FA where, for the last four years, he has been General Secretary.

Alex said: “I am incredibly proud to have worked for The FA for over a decade in many differing roles. It’s been a privilege to have played my part in the financing, build and opening of Wembley Stadium and the National Football Centre at St. George’s Park, both of which will provide a huge benefit for the game.

“More importantly, it’s been a pleasure to work alongside so many devoted and talented people within The FA who are passionate about developing and improving football across the country at all levels.

“This is probably the toughest decision I have made during my career. But after 11 fantastic years at The FA, I have decided to move on.

“At the age of 42, the time is right for me to look for a change of direction and I will be leaving the organisation at the end of January next year.”

FA Chairman, Greg Dyke said: “On behalf of the Board and the staff at The FA, I would like to thank Alex for his dedicated leadership in a variety of roles over the last decade.

“I will now work with the Board on finding his successor.”

Alex joined The FA as Finance Director in February 2004 and was Managing Director of Wembley Stadium, overseeing its completion and opening.

He went on to become Chief Operating Officer in May 2008 before taking over the role of General Secretary in May 2010.