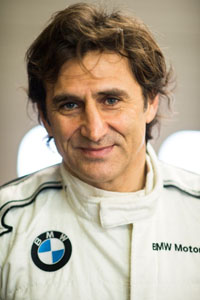 Motorsport veteran Alessandro Zanardi has been appointed as a new BMW Brand Ambassador.

In this role the BMW works driver will not only represent the brand by competing in the Blancpain Sprint Series, order but also off the race-track.

In 2001 the double ChampCar champion and former Formula One driver lost both legs in a serious racing accident.Only two years later, apoplectic Zanardi returned to motorsport, medic competing in BMW racing cars specially modified for his needs. In the FIA World Touring Car Championship (WTCC) he celebrated four victories together with ROAL Motorsport.

In total he contested more than 100 races in this series between 2005 and 2009. During his last WTCC season Zanardi started his second career in paracycling and made his big dream come true: to participate at the 2012 Paralympic Games in London (GB).

“We are delighted to welcome Alessandro as a brand ambassador into our BMW family”, commented Ian Robertson, Member of the Board of Management of BMW AG, Sales and Marketing BMW. “For his fans all around the globe he is far more than a superb racing driver. With his fighting spirit and his positive attitude, Alessandro is a true role-model. He has shown that it is possible to overcome all adversities and barriers. He is a real champion on and off the race track – and therefore a perfect international ambassador for our brand.”

“I am very proud to become a BMW Brand Ambassador”, said Zanardi. “BMW is like a second family, and over the past years we not only enjoyed great times together at the track, but we have also become close friends. To return to racing as a BMW works driver this season is already great – and the fact that I will now represent this iconic company as an ambassador is just fantastic. The trust the BMW family puts in me means a lot to me. I am very much looking forward to representing this fantastic BMW brand all over the world from now on.”

As brand ambassador, Zanardi will be there personally to represent the brand at various events world-wide. In addition, he will take part in internal events with employees and management.