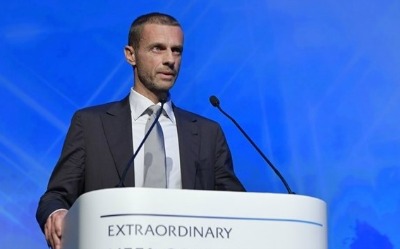 Aleksander Čeferin has been elected as UEFA’s seventh President at the European body’s Extraordinary Congress in Athens.

The 48-year-old Slovenian received 42 votes from UEFA’s member associations, against 13 votes for the other candidate, Michael van Praag of the Netherlands.

In taking the helm of European football, Čeferin follows Michel Platini, as UEFA President who spoke at the congress, despite being banned from footballing activity.

“It is a great honour and a great responsibility UEFA’s member associations have entrusted me with. I am looking forward to working closely with all of you in order to promote, protect and develop football across our continent and to ensure that the European football family is always united… now and in the future.”

Aleksander Čeferin was elected as Football Association of Slovenia president in 2011. He has also served as a second and third vice-chairman of the UEFA Legal Committee since 2011.